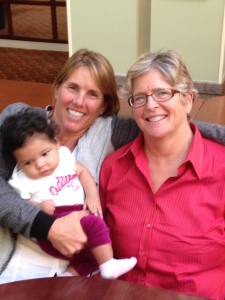 On Friday, I traveled from a state that nearly two years ago (on November 6, 2012) ratified its legislature’s legalization of full marriage rights for gays (signed by then-governor Christine Gregoire on February 13, 2012) to one that was the last (on May 8, 2012) to pass a constitutional amendment defining marriage as a union between a man and a woman. By the time my trip from Seattle, WA, to Durham, NC, ended, however, in the early evening on October 10th, North Carolina had become the most recent state to broaden its definition of marriage and to issue valid marriage licenses to same-sex couples.

U.S. District Court Judge Max O. Cogburn followed the Supreme Court’s decision four days earlier to deny the attempted appeal of the 4th Circuit Court of Appeals decision striking down Virginia’s similar ban. North Carolina is also part of the 4th Circuit, so of course it followed that District Judge Cogburn found that its decision on Bostic v. Schaefer trumps NC’s state voters’ idea of the meaning of “liberty and justice for all.”

Personally, of course, it was nice to land back east and not feel like I’d traveled into darker ages to a harsher and, frankly, more backward view of equality. Who likes to travel to a different part of her own country and have to adjust her sense of what it means to be a U.S. citizen as she travels across state lines? I’m not just a casual bystander regarding this matter; when WA state voters approved marriage equality in 2012, they cleared the way for my own marriage to my partner of fifteen years, which took place last summer.

No longer a newlywed myself, I’ve grown accustomed to introducing strangers to my wife without wondering, much less worrying, about their reaction, but the prospect of landing in a different cultural milieu certainly made me think, although fear for my physical safety was not my concern. That wasn’t the issue here, at least, for me… It was much more about how it would feel again to be viewed as a lesser person? What would it be like to sit with my wife in a restaurant babysitting our grand-daughter together? What about walking down the street holding hands?

So many miniscule details of married life I take for granted now, details which live out in public, as well as in private. Closeting part of my life, even trying to tamp down evidence of the extent of my relationship to my wife in public, is no longer possible. We have interwoven our lives and our habits too closely, and undoing any part of that at a moment’s notice, state lines be damned, isn’t possible.
And, worse, having to do that, to fake the absence of an existing connection, really does wreak psychological havoc. The damage that’s done to people who have to spend any brain power wondering if they are deficient in some way, harmful to the rest of society, less equal or less valued, is insidious and extensive. The act of having to lie about something that is as intrinsic to one’s identity as the sound of their laugh or the length of their foot is profoundly painful. Nothing good comes from self-denial, especially when the requirement to do so is pressed in from the outside world.

I didn’t think this way before marriage passed in Washington State. In fact, I was shocked by my reaction when the results came in: how emotional I felt, how grateful. No longer would I be viewed as a pariah, on the outside looking in, wishing I could not only feel normal, but be acknowledged as normal. Sitting across from a straight couple on the bus from SeaTac Airport to the car park right after the election, I felt so glad… Maybe they had voted for us, for me and my newly affianced, as we sat there holding hands, belonging, just like them. Something so very simple, elementary really, overwhelmed me as I realized how much I had had to bolster myself internally whenever I had reached for my true love’s hand in public, even in liberal Seattle.

No longer does that energy get wasted on worry, diverted from the good of life, of working on the issues and matters that lie at the heart of my identity. Thank goodness for that.

I, for one, am grateful for our federal constitution, for the wisdom of a government structure that doesn’t allow the tyranny and fears of a majority to ignore the founding principles of this country that I love. This is not really about state’s rights, but about human rights. Our country is finding its way forward and I couldn’t be happier that, in this case, we’re not following that worn pattern of two steps back and one forward but are forging a new one of giant strides toward a more equal union, not someday, but today.