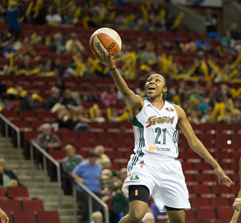 That’s the Storm’s tagline this year.

To catch you up, we have Sue Bird in her 14th year, Alysha Clark (AC) in her 4th year, Crystal Langhorne (Lang) in her 2nd year, Abby Bishop in her 2nd year (last seen in 2010) and the rest are all newcomers to the Storm. We have a new coach, Jenny Boucek, promoted from assistant, we have a new president, Alisha Valavanis, and we have hit the RESET button.

Jenny’s philosophy is a wide-open fast-paced offense so things are going to look very different. It’s a rebuilding year, but with a dynamic cast they should be fun to watch.

Abby Bishop just won the MVP for the Australian league.

Renee Montgomery won the 2012 6th Woman award in the WNBA. We acquired her in a trade for Camille Little and Shekinna Strickland that also netted Kaleena Mosqueda-Lewis (KML) who broke the NCAA mark for most career three-pointers.

Jewel Loyd, the overall #1 pick in the draft, is looking like the future of the franchise

The Key was full of energy and the players were excited and ready to go. Sue looked the happiest she has for a few years. And the fittest.

The excited crowd was left standing for an interminable 3:06 as the Storm missed three shots, had a few turnovers and allowed LA to get up 4-0. Finally O’Hea splashed home a three to get the Storm scoring started. At the 5:50 mark Loyd scored her first WNBA point on a free throw. Shortly thereafter Quanitra Hollingsworth (Q) scored her first points in a Storm uniform. The Storm had tied it up halfway through the quarter but allowed LA to go on a run to get up by 6. With LA up by 6 with 1:29 to go Tok scored, Renee hit one of two free throws and then hit a 3 pointer to win the first quarter 20-18.

A back and forth hard-fought quarter.  LA tied it up halfway through and from there the scoring was quite even, though not exactly stellar. With :48 to go the score was even at 31. LA made one free throw (something we were struggling to do ourselves) and then Lang got busy and popped in two with a running jump shot and a lay-up. Storm wins the quarter 15-14 and the game score is 35-32 going in to halftime.

The Storm came out of halftime blazing. Was it a great half-time speech? Were they fired up by the crowd not wanting to stand for an eternity again? Whatever it was, Lang scored 2, Bird Scored two and then Loyd made a jump shot and two free-throws for a nice little 8-0 run. The rest of the quarter saw back and forth with the largest run for either team 4 points in a row. 6 Storm players scored in the third and the Storm held on for a 22-13 quarter win and a 57-45 lead.

This quarter was All Storm with O’Hea going on a personal 5-0 run to start things off. Renee took over at the end of the quarter scoring 9 points in a row and then AC ended it all with two 3-pointers in a row. Storm outscored LA 29-16 to complete the sweep of winning each quarter and won the Season Opener 86-61.

21 assists on 32 shots made; the team is working together

9/10 Players scored (Only KML didn’t connect. But then, she didn’t attempt)

So it looks like I can’t find much bad news. GOOD!  We’re undefeated and now head out on a 3-game road trip. Tulsa’s next where two new players, Angel Goodrich and Markeisha Gatling will join the team.

*DISCLAIMER:  these recaps are written by Lynn Slaughter, an avid Storm fan with absolutely no basketball training, never played the game (can’t jump and throw simultaneously), but she HAS read “Basketball for Dummies.” Her opinions and comments are entirely her own and do not in any way represent the views of anyone with a monetary interest in the Seattle Storm; neither those who draw a paycheck nor those who provide the financial underpinnings of the organization (aka Force 10 Hoops, LLC).  I apologize for any bad grammar or typos; I do not allow my usual editor to touch these gems.