Wild meets The Boys in the Boat, a memoir about the quest for Olympic gold and the triumph of love over fear.

Ginny grew up in an era where girls mostly stayed on the sidelines in the gym–as observers and cheerleaders, not competitors and champions. Raised in a family where business acumen was treasured as the ultimate trophy, she toed the line of her father’s expectations. To Ginny, that meant the pursuit of academic excellence. However, her operating assumptions changed nearly overnight in 1975, as a freshman at Yale when she discovered rowing. From her first strokes as a novice, Ginny found herself in a new world. At Yale, she trained with two Olympic rowers and participated in the famous Title IX naked protest, which helped mold the future of women’s crew and helped define the Title IX movement.

Course Correction recounts the physical and psychological barriers Ginny overcame as she transformed into an elite athlete who reached the highest echelon of her sport. Taking place against the backdrop of unprecedented cultural change, Ginny’s story personalizes the impact of Title IX, demonstrating the life-changing lessons learned in sports far beyond the athletic fields of play. Her journey wends its way to the Olympic podium in 1984, carries her through family tragedy, strengthens her to face her own demons and truths, and ultimately frees her to live her life despite her persistent fear of loss. 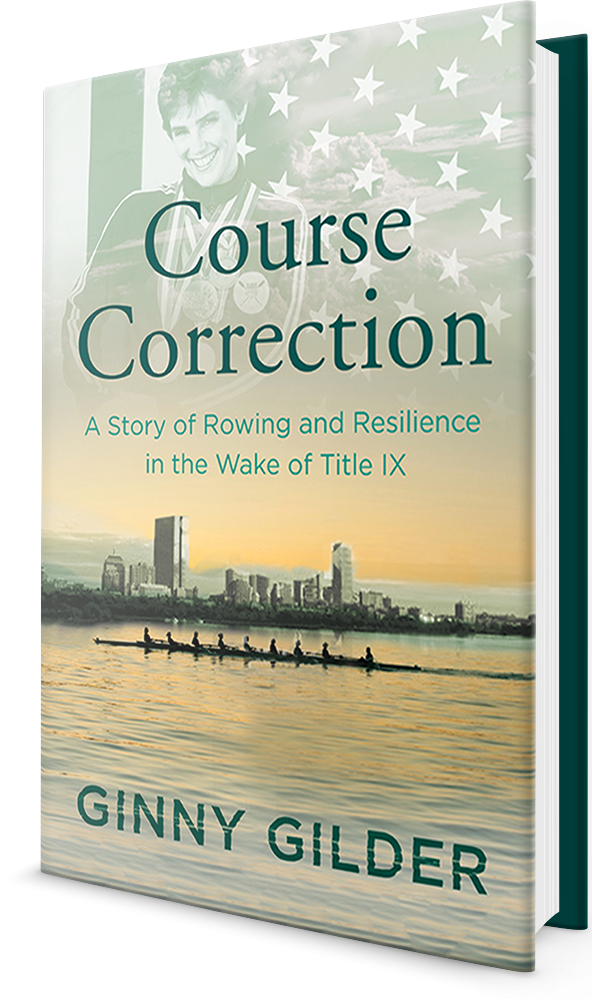 “Beautiful and important on so many levels, Course Correction is about rowing and about so much more–hope and hopelessness, fear and courage, loss and redemption. Ultimately it is about the transforming power of love, and, dammit all, it made me cry.”—Daniel James Brown, #1 New York Times Bestselling Author of The Boys in the Boat

“Written with poetic grace and true grit, Gilder’s story—of battling herself as much as her competition—will resonate with readers of all abilities and aspirations. A powerful testament to the impact of sport on our lives.”—Billie Jean King

“Course Correction is not only a wonderful narrative about what it took to succeed as an elite female rower in the Title IX era, it is a complex study of an individual who struggled to come to terms with herself in the aftermath of her own success. Beautifully written, this memoir will not fail to hold you in its powerful wake, page after page delivering the wisdom that only deep reflection and experience can bring.”— Daniel J. Boyne, author of The Red Rose Crew: A True Story of Women, Winning, and the Water

“Ginny Gilder not only shares her journey of becoming a world-class athlete, but of growing up—the searing self-talk of a teenage girl, her homage to the sport of rowing that both gave and helped make meaning of her life. A beautifully written memoir of a dream come true.” —Whitney Johnson, author of Dare, Dream, Do: Remarkable Things Happen When You Dare to Dream

“Filled with lyrical descriptions, [Gilder] unabashedly discusses the physical and emotional traumas she battled…forever looking toward an Olympic medal to crown her career. Having seen her mother come unhinged when her father left her for a younger woman, Gilder’s deepest fears centered on becoming just like her mother, but through rowing and a personal tragedy, she was able to persevere…a story of struggle and triumph, of shrugging off the naysayers to follow a dream to its end…of following the heart.”–Kirkus Reviews

“Ginny Gilder graduated from Yale in 1979, won an Olympic silver medal in 1984, and currently owns a WNBA franchise. By all accounts, her story should be one of success and triumph, but in this intimate and detailed memoir, she reveals the struggles she has endured and the inner demons she has battled along the way. She fell in love with rowing from her first glimpse of the shells gliding on the water, but she was a novice rower when she joined the Yale crew team in 1975. Gilder…describes the art of rowing in wonderful detail…she divulges the scars of her relationship with her parents, feelings of self-doubt…and the inner turmoil she experienced in accepting her own sexuality. This is a compelling account of one woman’s sacrifices to be an elite athlete…at a time when “coming out of the closet” was done at considerable peril. A good choice for women’s studies and sports-history collections.” — Craig Clark, Booklist

“Ginny Gilder writes with an artist’s eye and an athlete’s power, insight, and finesse. Course Correction is a brilliant quest for courage, excellence, and ultimately love. Exhilarating and inspiring. Simply put, I loved this book!”—Lynne Cox, author of Swimming to Antarctica: Tales of a Long-Distance Swimmer and Grayson

“Whether you’re a wetbob or landlubber, Ginny Gilder’s lyrical descriptions of rowing will have you yearning to be on the water, while her gripping life story will keep you eagerly turning the pages. She writes as she has lived—courageously, honestly, and thoughtfully. An oar-inspiring read!”—Roz Savage, first woman to row solo across three oceans, author of Stop Drifting, Start Rowing

“The 1970s were the breakthrough decade for Title IX and for Ginny Gilder and they both just kept getting stronger. Here’s a personal glimpse, with a few course corrections along the way, of what the revolution in women’s sports looks like from the perspective of one of its pioneers.”—Susan Ware, author of Game, Set, Match: Billie Jean King and the Revolution in Women’s Sports

“Course Correction is the story of one woman’s heartfelt struggle to be true to herself despite a boatload of obstacles. Part memoir, part sports history, the work is also a love letter to rowing and to Yale, to the author’s parents and her siblings, to her partners and her children, to Olympians, past, present and future, and to female athletes everywhere.”—Madeleine Blais, author of In These Girls, Hope is a Muscle

“Highly competitive athletes like Ginny Gilder have a gift for tolerating pain and ignoring adversity. They accept these things as the price they pay for greatness. These habits of mind and body serve us well in many aspects of our lives, but not in all aspects of our lives. Course Correction is about taking time to heal and exploring the joy that lies beyond adversity.”—Tori Murden McClure, first woman to row alone across the Atlantic Ocean and author of A Pearl in the Storm